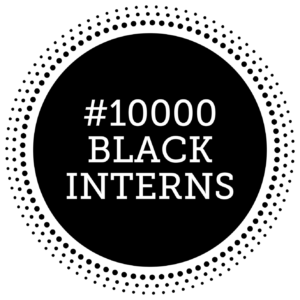 How did you find out about the 10,000 Black Interns initiative?

I first heard about the initiative through a LinkedIn post, which was encouraging people to apply. My friend had also seen a post publicising the opportunity on Twitter, and flagged it with me as she knew I was looking for an internship. It was everywhere! That’s when I decided to just give it a shot and apply.

Why do you think programmes like these are so important?

They’re incredibly important because they foster an “if I can see it, I can be it” mentality. Seeing black people occupy roles in industries like these really motivates you, and makes you think “that could be me 10 years, if I keep working hard and striving for better”.

They also open your eyes to careers you had never considered before, or just thought weren’t available to you. When I first applied to the intern programme, I knew nothing about private equity. I’ve now learned what this industry is all about, and have been exposed to so many other career paths in the process.

What have you enjoyed about private equity so far? Do you think it might be a career you’d like to explore in the future?

I’ve really enjoyed doing rotations across the firm and being able to experience every single aspect of a deal process, from start to finish. I started in Direct Origination and finished in the Value Strategy Group, and the whole full-circle experience has been really insightful.

It’s absolutely a career I would like to explore in the future. I went to university thinking I would end up in investment banking – that was the obvious pathway for me because it was all I had really heard about. Once Livingbridge contacted me, I started doing my research on the private equity industry and found it incredibly exciting. Private equity is an industry most people enter after they’ve worked in other fields, such as strategy consulting for example. I’m doing the opposite and starting at the end!

Is there anything else in particular you’ve enjoyed in your rotations?

I really enjoyed my rotation in the Enterprise Team. They were working on a few different projects at the time, and I really enjoyed supporting them in evaluating the companies and carrying out market sizing activities.

When you read about investments or exists in the news, you’re only being given a window into the end of the process – you’re not being shown the “behind-the-scenes”. It has been fascinating to see the thought processes behind these multi-million pound deals. I was a bit star-struck at times!

What were you looking to gain during your time at Livingbridge? And do you think you’ve achieved it?

The main thing I was looking for was career clarity. Everyone who studies economics or finance like I did knows about the types of industries open to them, but most don’t know which one to explore.

At Livingbridge, my goal was therefore to speak to as many people as possible and find out how they got to where they are now. Most of them didn’t join Livingbridge at the end of university, so I wanted to know about their journey and the previous careers they had had. That was really at the forefront of my mind, and I’m happy to say that I’ve achieved it.

There were some careers that I had never even thought of before, like strategy consulting. That was never even on my radar. But hearing from people who were in these fields before their time at Livingbridge has given me a much better idea of what I want out of my own career.

How do you think allies can work to foster an inclusive workplace?

The first thing you need to do as an ally is take a long hard look at your own firm. Does the ethnic minority representation in your firm reflect that of the society you’re operating in? If it doesn’t, then it’s not as inclusive as it should be.

If you are noticing a disparity, then you should actively seek advice from people who can help you change the status quo. Many people recognise that their firm has a diversity problem, but don’t know how to fix it. Reach out to organisations who know how to help foster diversity and inclusion – such as the Taylor Bennett Foundation.

For those ethnic minority individuals already in the workplace, mentorship and sponsorship programmes are key to helping them with their career progression. These programmes are beneficial both for the individual receiving the advice and guidance and learning those little shortcuts that come with experience, but also for the firm who is fostering cognitive diversity.